I have just got back from a wonderful week in Poland. Holidays are good for me! I know everyone would probably say that but honestly, on holiday, with the freedom to just relax and no pressure to do or be anywhere, I am truly me again. Plus I get to have my man with me everyday and I know that just makes me feel complete as I hate it when he’s not!
We had a great time and I went over there not knowing what to expect. Grateful for this birthday treat and kind friends who made it possible. With no expectations, other than knowing I wanted to go to Auschwitz.

When we were there though I kept just feeling uneasy about going. I have read a lot of books about WW2 and mainly stories of courageous survivors. I knew our little lion would be ok, it would all go over his head.

Yet on the Sunday night before we were going on the Monday we watched Schindlers list. We watched and were again horrified at how humans can treat each other. To be so brainwashed and evil, to genuinely see a group of people as not lives but rats to be disposed of.

Watching these horrors again I just felt-‘I don’t need to be there. I understand the history and have no problem with it still being a museum for people to go to. Yet for me. I don’t need to stand in the spot where thousands if innocent mothers, sisters, fathers, grandparents, babies were gassed to death. To begin to imagine is hard enough, I don’t need to go into that place of darkness.’

Yet Schindler’s List is such a story of HOPE. Of kindness and courage and determination and of someone seeing beyond their culture and situation. Leaving fear behind and truly doing all he could do, telling a different ending, showing a different way.

So we went to the Jewish Quarter where the ghetto was, and to Schindlers Factory. Just as we felt there was clear hope there. It was amazing to look at the gates and know that these would have been a relief to see each day for so many. It wasn’t ideal and still it was so little really for what these lives deserved but it was huge for the time.

As we went around the museum it cleverly slowly built up the picture of what happened in that time. The slow increase of Nazis, the fighting and the Nazis bringing in their rule. Changing road names to German ones and putting their ideals everywhere. One quote stood out to me 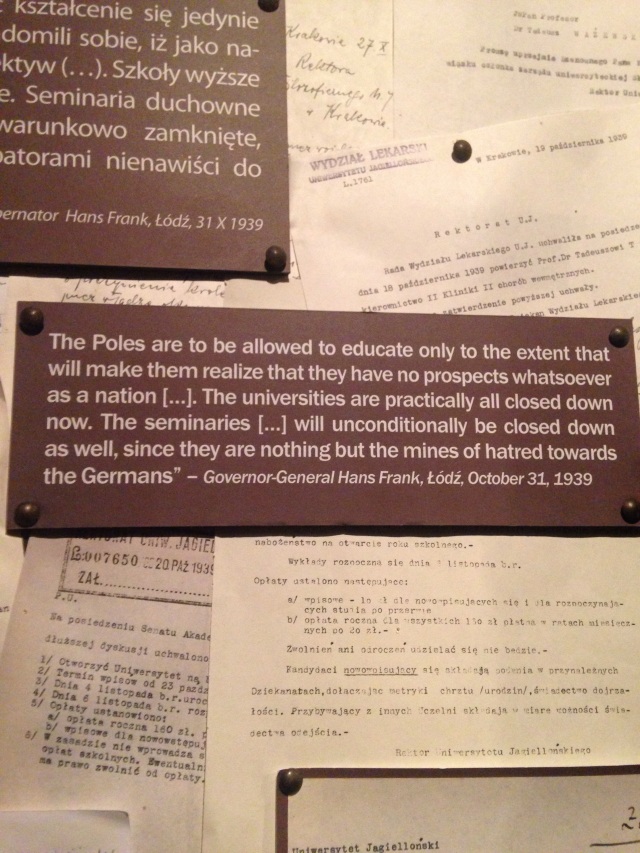 ‘The Poles are to be allowed to be educated only to the extent that will make them realise that they have no prospects whatsoever..

It did something as I read it. Something inside me was so angry and I couldn’t believe this was ever able to be written! That people are to be educated only to the extent that they ‘realise’ they have no prospects whatsoever.

Reflecting on it I feel like this is written so blatantly and is terrible. Yet I think it’s a clear lie from the enemy. A lie which many of us have felt through life. I have met so many people who feel they have no prospects whatsoever.

In prison I have spoken to men who were taught by their fathers that if they want a home to live in & not get thrown out they must fight. One of these men was told not just other children but fight his dad’s friends, when he was just a child. Educated by his father that his only prospect, if he wanted to stay living with his family and to do well in life, was to fight. He was serving (& still is) a life sentence in prison for murder, he was 20years old.

I have a gorgeous friend who shared with me the other day that when she got kicked out of home at 15, she cried to her mum ‘where am I gonna go, what will I do?’ Her mums boyfriend told her she’d best go get pregnant & then she’d get a house.

Thankfully my friend didn’t follow the path that so many girls feel is their only prospect at a good life. She found Jesus & in Him she found who she was meant to be. She’s now a wonderful wife to a Godly man and mum to two beautiful children, she speaks to young people about her experiences and is a gifted musician & lyricist.

The voice of Truth is the one we need to hear. Not the words and lies that surround our culture. Every child needs to be educated that they can do anything they put their mind to. You wouldn’t tell your child that they’re not really clever enough, pretty enough, strong enough..yet we say it over ourselves all the time!

I’m not a historian & I don’t know much about Poland today in a broad sense- but I know the places I went to in Krakow & the people I met. Through them I am delighted to say that I see this lie lifted. I see people of kindness & character and a city that is so full and beauty and purpose.

I pray that Poland will grow in the realisation that they have huge prospects. As I do for our children & ourselves, whatever age we are. Not just because it’s nice to say but because it is the Truth as we live as children of God. Heirs, sons & daughters of the King. As we humbly follow He will strengthen us & give us all we need.