I can be a bit of a cow. I feel like often people either think I’m really nice or they think I’m a bit off. Hopefully people that know me find me somewhere in between, but I can certainly fly to either end of the scale! I’m working on it. And I don’t think it’s only me.

Tonight I went to the cinema with my husband, I wanted to watch Jungle Book (for the second time) but he wanted Captain America, Civil War. It’s free as I have a cinecard & we have ‘meerkat Tuesday’ deal so I let him win-though by the time we have added a multicoloured tango drink and popcorn (..and malteasers) it is never actually a free night! We still kid ourselves; high-five!

If you’re a huge Avengers fan then I hope I won’t ruin anything if you’ve not seen the film. This advert pretty much sums it up… 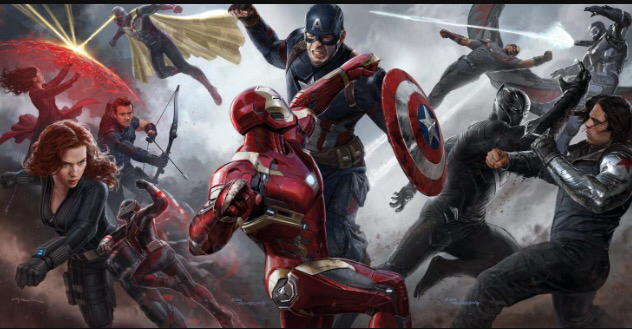 The goodies turn on each other.

Yet as the person watching it all, I felt like shouting ‘You are just misunderstanding each other‘ and ‘if you just sat down you’d see you’re on the same side!’ Or ‘Stop wasting your power on hurting each other, find the real baddie!’

Meanwhile the weak, creepy, enemy is sat rubbing his hands. He sees that he doesn’t really have to do much at all..he can just plant seeds of division and create the situation-then they will kill each other. They do for him what he would never have the power to do!

As I saw this I felt like this is exactly what happens with me, in our society, and sadly in the church. We’re on the same side. Yet so often, it just takes a seed of doubt and we join in on thinking badly of someone who is our sister/brother in the family that is church. It just takes a situation to change and we turn on each other..meanwhile I’m sure the enemy then just sits rubbing his hands!

Last year at Cherish Conference in Leeds I remember Priscilla Shirer talking about Ephesians 6 going through in detail about the Armour of God.

‘Above all, lift up the [protective] shield of faith with which you can extinguish all the flaming arrows of the evil one’

She said that in a battle the army don’t fire flaming arrows in order to kill but more to distract. If there’s suddenly a fire then the army in that area fall out of line and turn in to put out the fire, they break ranks and turn away from the enemy and out of what they have been called to. I believe the enemy does this in the church. He throws fiery arrows in order to distract.

How many of my friends are turned off from church and therefore Jesus because of ‘hot topics’ such as Women Leaders, Denominations, views on homosexuality, evolution or creation .. In some ways these fires take our eyes off the main goal. They prevent us moving forward together, instead we’re falling out and distracted from simply following Jesus.

Like I said, I can be a bit of a cow. I can be quick to judge. It often comes from a place of insecurity. I decide other people’s opinions of me whatever the reality actually is and I can be quickly hurt (or scared to get hurt) and so retreat. In my thinking I can turn on others and so exclude them. Like the Avengers turning on one another.

As an audience member watching that movie, I’m seeing the whole picture- and God is similarly sat as the only one who sees the whole film of our lives. He even knows the deleted scenes!

I’m sure He must sit and say, ‘If you just listened to her you’d understand’, or ‘Come ON Han, you’re on the same side! Stop wasting your time, effort and power on fighting the wrong people’

The Bible is so very clear about this;

It’s not, ever, about fighting people. Not any people. It’s not my place to judge and if I do all I’m doing is turning on the good guys as the only bad guy is the weak, creepy  enemy and I will not allow him any victory. I want to keep my thoughts and heart in check. I want to take my issues up in prayer not in gossip. Man, it’s easier said than done!

Yet I have found such a beautiful group of women around me who model this, who make me feel a part of something and that we all genuinely care and uphold each other. I know it’s what we are called to do. To raise our game!

To have each other’s back, to lift up and encourage not make feel small. Paul was speaking about working in harmony together in Philippians 4 and I love this so much it says perfectly my prayer for us..

Rejoice in the Lord always [delight, take pleasure in Him]; again I will say, rejoice! Let your gentle spirit [your graciousness, unselfishness, mercy, tolerance, and patience] be known to all people. The Lord is near. Do not be anxious or worried about anything, but in everything [every circumstance and situation] by prayer and petition with thanksgiving, continue to make your [specific] requests known to God. And the peace of God [that peace which reassures the heart, that peace] which transcends all understanding, [that peace which] stands guard over your hearts and your minds in Christ Jesus [is yours].

If we truly walked in this and kept our heart and mind on these things, we’d be so super-powerful! How can we do this? By purposefully loving. The first and only way is to be loved, so go back to Jesus. In finding how loved we are by Him and how He encompasses all these areas of peace, honour, respect etc., then in being like Him and living in a rhythm of hearing and feeling this from him..the fruit will be us being a strong army under Him and all the victory is His. He has already won. Together, we’re a pretty great line-up!

2 thoughts on “Who are you fighting?”